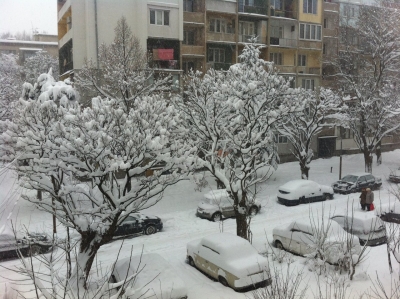 The temperature has all of a sudden dropped dramatically here in Sofia and although it is supposed to be 5 degrees it seems well below freezing. We had a lot of snow last night and it is still falling. All the pavements are white and Bulgaria seems a completely different place now to the warm Autumn sunshine we had at the start of October. The trees are bare, there's a real cold nip in the air and everything seems a bit greyer than usual. Needless to say even I am not walking round in a T-shirt anymore and have invested in the thickest brown winter jacket I could find. I also got a pair of boots because as soon as you step off the pavement you can find yourself knee high in snow piles that have been shovelled to the sides of the road.

I'm getting more confident all the time with my Bulgarian and everything isn't such an effort now as it was at the start. I am able now to have chats with Ivo who is one of the security guards at our accommodation block. Ivo has an office with a small red armchair, a heater, a TV and a window where he can see everyone coming and going. Ivo is also a big football fan and last night invited me into his office to watch Liverpool play in the Champions League against Betis. I considered this a real privilige to be invited into the security guard's room to watch the football. It's freezing outside and Ivo's room is warm and cozy with the red glow of his electric heater. I take a couple of cans of beer and make myself comfortable in another old armchair that he has kindly prepared for me.

Ivo shouts a lot at the TV and I watch and listen with interest more to Ivo than I do the match. This is really good experience for me, spending time socially with a Bulgarian who doesn't speak any English. Ivo knows more about English football than I do and it is obvious in Bulgaria that English football has a big following. Liverpool aren't playing very well and every refereeing decision that goes against Liverpool makes Ivo gesture angrily at the TV and shout 'съдията педерас' which I quickly workout, thanks to Ivo's eye-opening explanations, means 'the referee's a bender'. I find this quite amusing for some strange reason as it is not something we would shout at the referee back home. Another boy pops his head in to see the score, also shouts 'съдията педерас' and leaves without even a hello or goodbye. By the end of the match this phrase is well and truly cemented into my range of Bulgarian vocabulary.

Ivo also tells me with quite a lot of amusement that the referee is 'шест без десет' which I know from my lessons means 'ten to six'. I don't know why he is saying the referee is 'ten to six' but from the context I work out that it must be another way to say 'crazy'. After another decision goes against Liverpool I decide to practice this new phrase and say 'съдията е шест без десет' and Ivo starts rolling around laughing. There is no stopping Ivo now and he starts teaching me more ways to say 'crazy'. It turns out there is a staggering amount of variations for saying 'crazy' in Bulgarian, my favourite one of the long list Ivo gives me must be 'хапе го коня' which roughly translates as 'the horse bites him'. You can also say someone has a 'жълта книшка' (yellow card) and that they are '5 часа на въртележката' (5 o'clock at the merry-go-round). Over the following months I discover that Ivo's enjoyment in teaching me slang phrases isn't unique to him and this is something that Bulgarians particularly like to do - teach me all sorts of weird and wonderful Bulgarian sayings and phrases.

The phrase that Bulgarians seem most proud of and I must admit is a very good saying is 'гладна мечка хоро не играе' which means 'a hungry bear doesn't dance'. 'Шамар да е, аванта да е' is also one of my favourites, which is a much better and more imaginative way of saying 'something is better than nothing'. My favourite health associated saying is 'който пие бира не умира' (whoever drinks beer doesn't die) which is much better, although maybe not scientifically proven yet, than ours 'an apple a day keeps the doctor away'.

Bulgarians also have some good retorts to famous sayings which I really like. For example the saying 'рано пиле рано пее' (roughly equivalent of ours 'the early bird catches the worm') can sometimes get the quick reply 'но и рано го колят' which translates as 'and they cut its head off early too'. So getting up early in Bulgaria isn't always good for you.