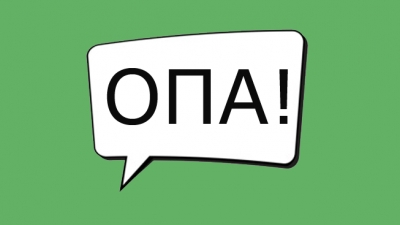 There's some brilliant words in Bulgarian that we just don't seem to have in English. I don't mean long complicated words that no one understands. I mean there are these short words, and I'm not even sure whether they would officially count as actual words. Or are they just sounds that you can shorten, lengthen and change the tone of to suit the situation? You hear them everyday in Bulgaria without fail and once you start using them you just can't stop. They can be used in a huge variety of situations and can express a whole magnitude of different emotions. I have already talked about 'такова' in an earlier post but I think these short words are more catchy and certainly easier to learn, plus you can say them completely independently of anything else whereas for 'такова' you probably need some Bulgarian before of after it.

I'd lived in Sofia for 7 months and studied Bulgarian all that time and I must have heard this word lots of times but the first time I actually paid any attention to 'опа' was in games of football we'd play some evenings in Sunny Beach. Every time one of my teammates wanted me to pass him the ball he'd shout 'опа' at me. Every time he'd bang into someone he'd also shout 'oпа', every time the opposition scored he'd say 'опа' and every time someone scored a really good goal he'd again be shouting 'опа'. Now admittedly each 'опа' was expressed in a slightly different way according to the situation but he was getting some real value out of this short word 'опа'.

By the end of the match I was also enjoying shouting 'опа' at everything that happened. It was as if I'd just magically learnt a new language. I was sort of testing it out to see if I got some strange looks for using it in the wrong place but it seemed as if, yeh, you could shout 'опа' in just about every situation. I soon found out that this wasn't limited to the football pitch either, if you bumped into somеone in the shop you could also say 'опа', if one of your friends tripped over you could say 'опа', if you spilled your drink you could say 'опа', you could even say 'опа' to your friend when a pretty girl walked in the room. Just saying 'опа' in this instance would get him nodding in agreement with everything you've just said.

I point all this out becuase I just can't think of any equivalent word in English that even comes close to being suitable in all those different situations. We'd have to expand and be more specific to understand each other whereas an 'опа' is all you need in Bulgaria. Come to think of it, I definitely over use it now to such an extent that when I go back to the UK I just can't stop using it and forget that 'опа' doesn't mean anything to people over there. I often have to get the response 'pardon, sir?' to realise that I must have used one of those short Bulgarian words again by mistake.

Another great one is 'о-хо', or is it 'охо'? I've never seen it written down but again I find my self using it a lot and wondering what the hell do I say in English when I would normally use a 'охо' in Bulgarian? If you unexpectedly see a friend on the street in Bulgaria you need to start saying 'охо' to each other. It is like an unwritten rule of etiquette, I can't imagine any unexpected meeting passing without a 'охоooo'. And the longer you haven't seen your friend for, or the more unexpected the meeting is, you have to do that justice with the the length of your 'охо'. As a rule of thumb I add an extra 'o' for every day since I've last seen that friend. So if I haven't seen them for a week I'll add about seven 'o's' and say 'охоооооооo'. There is a slight variation to 'охо' too, you can get away with saying 'ехе' but personally I would use that more if someone has given me a suprise present for my Birthday for example or if I'm at work, it's only 9.30am and I thought it was almost lunchtime, I could say 'ехе' then as well. These are just a few examples of when to use 'охо' and 'ехе', there are doubtless thousands of other situations where they would fit in perfectly too. If you can't understand a story that a Bulgarian's telling you, a 'охо' and a 'ехе' here and there will get you through.

There is also a short word in Bulgarian, again without an adequate English translation, and which is a pretty good substitute for swearing. Maybe in the UK people might say 'flippin heck' or 'sugar' but those don't go close to the multi-layered meaning of 'ужас'. 'Ужас' can literally mean something along the lines of panic 'изпадам в ужас' or horror 'Филм на ужасите' but that's not really my favourite way to use it. Just saying 'ужас' as an alternative to something like 'for fuck's sake' is more how I prefer to use it. So it gives you the satisfaction that swearing kind of gives you in certain situations but it's not considered impolite or vulgar. The bus left without me - 'ужас', the boss didn't pay me this month but has just gone on holiday - 'ужас', I just stepped in a huge dog poo - 'ужас'. Now undoubtedly there are ruder alternatives in these situations but I think 'ужас' is a good generic, non-rude, satisfaction-giving compromise.

It was in Sunny Beach that I heard 'леле' for the first time, someone said it was more of a Varna thing but I'm not too sure about that because it seems pretty widespread. I'd heard 'мале' a lot more though and was already employing that word regularly. If one of the tourists was sick on the bus I would say 'мале', if I overslept I would say 'мале', if the tourists gave us a lot of tips both me and the driver would say 'мале' to each other. If you say it twice 'мале мале' it tends to imply that the situation is a bit more serious.

One of the few times I witnessed Bulgarians walking around saying 'мале мале' and 'ужас' together was ат 3am in the morning after a power cut at Burgas airport. Two planes had landed and all the tourists were waiting for their luggage. The power cut stopped the luggage belts from working and hundreds of tourists were left waiting inside. The aiport authorities then decided, for some strange reason, that it would be a good idea to bring all the luggage, literally hundreds of suitcases and bags, round to the front of the airport and pile them all up in one big mountian of suitcases in the middle of the carpark which was also in complete darkness because of the power cut. It was absolute bedlam. Imagine hundreds and hundreds of very similar looking suitcases piled up in a dark car-park with hundreds of very cross tourists all trying to find their bags at exactly the same time. Everyone was clambering over each other, throwing bags backwards and forwards, shouting, scrapping. The tourists had to resort to a lot of swearing whereas the Bulgarians were able to express their shock and suprise at the situation in a less rude way by just saying 'малеee' and 'ужас' to each other. Although one irate German tourist did make me laugh when he shouted at the top of his voice 'Velcom to Bulgaria'. 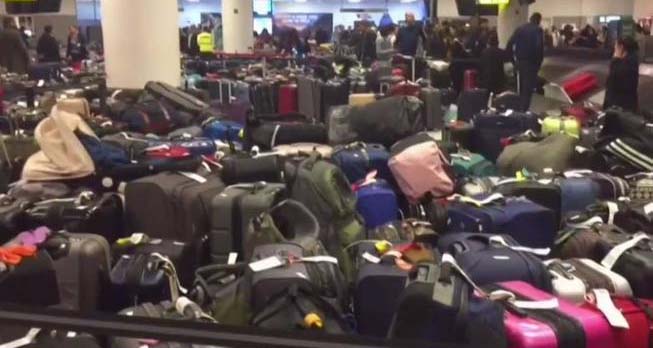 Bulgarians are generally very good at swearing when the need arises, they have a lot of different ways to express themselves colourfully when angry, frustrated, suprised, or just for the sake of it. I won't start going through all the swear words that my Bulgarian colleagues kindly taught me during those 5 months in Sunny Beach but I can say that if we had a test now I'd be very confident of a 'шестица'.