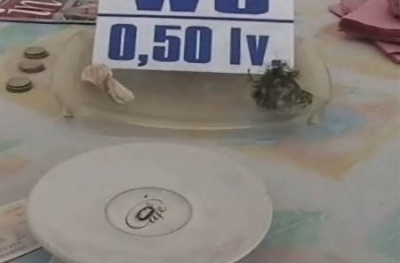 Friday, end of the week, seemingly millions of new Bulgarian words and grammar rules to learn. But today I was confident of finally making it into the National Library to do some studying. I had my passport, I had found a spare passport photo and I had my 7 leva joining fee ready - in cash. Nothing was going to stop me now. Without too much fuss I handed everything over to the woman at the desk in the National Library and after a few minutes I had my very own photo ID library card. Feeling rather proud I thanked her, strolled towards the reading hall only for her to call me back. What could be wrong now? The woman pointed me over to the far corner of the entrance hall where there was another woman standing behind another desk. I can't believe it's so complicated, it looked like I was only past stage one and now there was another woman to negotiate. It turned out you weren't allowed inside with your bag or jacket and had to hand them over in the cloakroom in exchange for a number, which must be the desk number that I had to sit down on. The cloakroom woman also gave me a small piece of paper that looked like some sort of form. So again I made a bee-line for the reading hall but again the first woman stopped me and called me over. I needed to get a stamp for my own text-books that I was taking into the library. Passport control at the airport was a breeze compared to this and I was still holding this little form whose purpose was still a mystery to me.

The entrance to the reading halls were 2 huge, heavy brown wooden doors that creaked as you opened them before stepping into the silence inside. Everything was wooden, the floors, the desks, the book-shelves. I eventually found the desk with my number after creaking my way around the wooden floor making everyone shoot 'who's making all that noise' glances at me. Was there a special way to walk to avoid creaking with every step? The reading hall was made up of about 50 rows of desks all facing towards the front of the hall. At the front of the hall on a large desk facing everyone else sat yet another woman. I supposed she was there to maintain law and order. It didn't seem like there was much chance of a rebellion. My creaking alerted her to my entrance in the reading hall and she lifted her chin and followed me with her eyes as I tentatively made my way to my desk.

Half way through learning my first page of new Bulgarian words I noticed a boy get up from his desk and approach the woman sitting at the front. This would be interesting. Is he going to report someone for making noise or maybe you need to ask to go to the toilet? He handed her the same little piece of paper that I was given, whispered something to her and then sat back down. She went off somewhere with his piece of paper in hand. What the hell is going on? Do I need to give her my little piece of paper too? 20 minutes later she came back with 3 or 4 books, put them on the boy's desk and returned his little piece of paper. So if you want to read a book it seemed you can't just go and get it off the shelf, you have to fill in the little form, hand it to the woman at the front and she will go off and get your books for you. There was a lot of processes going on here. I looked around to see if there was any other foreign looking people in the hall and couldn't spot any. I wasn't suprised, it was quite hard to work out how the whole system functioned without knowing the language.

After a while I decided to give myself a break and find the toilet which turned out to be in the basement down some castle-like spiral stone steps. There was a small circular table at the entrance to the toilets with a grey toilet roll on it, a small white plate, a pile of pink paper napkins, and a little sign saying '50 stotinki' (50p). I walked straight past it as I assumed it was an option to buy some extra toilet roll. I was suprised however when I came out of the toilet to now find a woman suddenly sitting at the little circular table. She wasn't smiling. I gave her a polite smile nonetheless and said 'Довиждане' (goodbye). Now it could have been my bad pronounciation meaning I had said something terribly rude to her by mistake because she leapt up and started shouting at me. I was a bit flabbergasted, she looked really cross. She held up the sign saying '50 стотинки' and started prodding the small white plate. I couldn't understand a word of what she was saying but I did understand that I needed to put 50 stotinki in her plate quick. Much to my terror I only had a 2 leva note which seemed to cause her even more anger as I pulled it out of my wallet. After a few more seconds of being cross with me and looking extremely inconvenienced she reached into her purse and counted my change out to me. As soon as I was out of her sight I ran up the stone spiral stairs and sat down in the calm retreat of the reading hall.

I made many more visits to the toilet over the following months and built up a good rapport with the woman collecting the toilet taxes. I always made sure I had a 50 stotinki coin before I went even if it meant me buying something I didn't need from the cafe. She was actually a very cheerful woman, was very interested in what I was doing in Bulgaria and even laughed at some of the silly words I had learnt and tried to get into every conversation. I came to find this as quite a common pattern when I got to know Bulgarians. At first they can seem very serious, they don't tend to exchange smiles with strangers they pass on the street. It was not uncommon for me to walk into or get into a taxi, say 'Добър ден' (good day) and not get a reply. As a British person I would often try to fill an awkward silence by making a comment about the weather. For example I would sometimes say 'голяма жега днес' (its very hot today) and just get the reply 'e лято е' (it is summer). This reply would sound very strange back home but it taught me in Bulgaria not to just say something for the sake of saying something. It did make me laugh inside sometimes not getting a reply to a pleasantry but it also took the complication out of things. In Bulgaria you just get to the point and it's not considered rude. It is perfectly normal in a Bulgarian restaurant for the waitress or waiter to come over and say nothing and for you to launch straight into ordering 'една бира и порция пържени картофки' (a beer and a portion of chips). And that's it. Simple. A similar order in Britain would be far more drawn out and would have to include at least a few thankyous and pleases. Bulgarians don't engage in pleasantries as much as we do and so sometimes British visitors think they are a bit rude and serious but it's just that they don't have these obligatory niceties. As soon as you get to know a Bulgarian they often become much warmer, smilier and a lot less serious and more fun-loving than we often are.

Anyway. National Library = Conquered. It only took me 3 visits and 6 bus journeys to work out the system. Now for the weekend.

More in this category: « Day 6 | Dentist