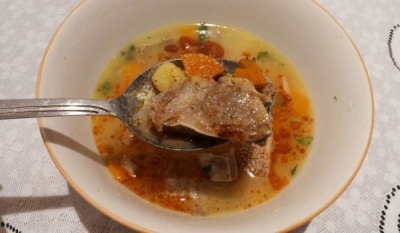 Monday morning and the day that I will hopefully start my Bulgarian course. The Department for Foreign Languages of Sofia University is conveniently attached to my tower block where I suppose students who study here from far away sleep. Just like me. I have already enrolled on the course and paid a deposit so I suppose all is left now is for me to go to the reception of the foreign languages department, tell them my name and that I've enrolled on a Bulgarian course and away we go. I take the 30 second walk around to the front of the building, in through the main door, past several student looking people standing around and again see a security man in a little office on an armchair and a TV in the corner. I tap on the window and he slides it open. I say my full name and 'Bulgarian course'. He looks at me blankly. I realise I should have printed off the confirmation letter with a few more details. He gestures to one of the Turkish students with broken English to come and translate but we don't get any further so I leg it to the internet cafe 2 minutes down the road, print off my letter and come back. He looks at the letter and points me to another room on the ground floor.

I knock the door before entering and alas this is more like the reception I was expecting, a long counter, lots of files, posters and announcements on the wall and a few women pottering around. None of them speak any English so I just hand my letter over. After going through her file she says 'tommorrow' and then points at a piece of paper in Bulgarian with '08:30' at the top and '13:30' half way down. I presume this is the lesson times, 08:30 till 13:30. I nod my head and say 'Blagodaria'. She points at the two times again, a little bit harder this time so I say 'da da blagodaria' in a more affirmative voice. She then raises her voice and says '08:30 ili 13.30'. I have not come across this word 'ili' before but it is pretty obvious it means 'till' so I nod my head even more and say 'da da understand'. Her voice gets louder as she repeats herself again almost making a hole in the paper pointing at the two times with her finger. I just opt for the smile and the nod this time. She then raises her eyebrows, points at '13.30' and takes the piece of paper away. I look up 'ili' in the dictionary later and find that it means 'or'. I see, she must have been asking me if I want morning or afternoon lessons. I did want morning but I suppose its too late so 13:30 it is.

Since arriving I haven't been eating that well mainly because I just don't know what to eat. The second night I went to the small supermarket 'Fantastiko' on the corner but I wander around it twice and can't find any food I recognise and that I can cook without an oven or hob. I eventually find a box of cereal and some milk so at least that's my breakfast sorted. I stand in the queue listening to and watching the Bulgarians in front of me pass through the till to see if I'll be able to negotiate it successfully. It seems pretty straightforward, the products are put through and the lady cashier says the final price that also shows clearly in green writing on the screen. Great! No need for any Bulgarian and no danger of any awkwardness. The couple of Bulgarians in front of me pass through, my turn comes and the lady cashier looks up and asks me something in Bulgarian. Why me? She hasn't asked anyone else anything. So with several people looking round at me waiting for an answer that's never going to come I shrug my shoulders and say 'ne razbiram', I don't understand. This happens every time I go to the supermarket and I can not work out why they only ask me a question until a few weeks later a man behind me in the queue translates 'would you like a separate bag for your milk?'. So it was the milk's fault.

Anyway, as I was trying to avoid the awkward question in the supermarket I discovered that there was a canteen on the ground floor of the student accommodation. I went in looking forward to a good meal. They didn't speak any English, there was no menu in English and so the man running it pointed up at a couple of pictures on the wall. One of the pictures I eventually worked out was a plate of chicken hearts. Being a fussy eater I definitely didn't fancy that. Thankfully there was also a picture of a bowl of soup, what could go wrong? I was halfway through my soup and getting increasingly suspicious of the meat inside. I gestured to the man to ask what it was and he pointed to his tongue and said 'moo'. It's the only time I've ever eaten tongue soup. I wasn't enjoying the Bulgarian food very much.