Day 2 | The boy with the drill 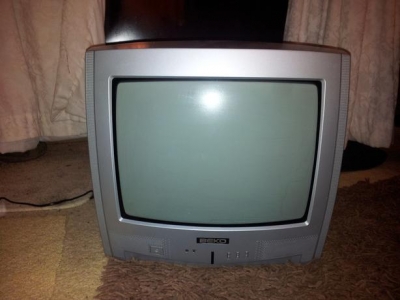 When trying to get to sleep the previous night I'd decided that it would be a good idea to get a television for my room. It would give me something to do in the evenings, provide me with a bit of company until I found some friends and would be a good way to listen to and get used to some Bulgarian. I looked up the words for 'television', 'where' and 'buy' in my dictionary. Armed with my new Bulgarian words I approached the security guy's little window in the block's entrance. He saw me coming, sprung off his old red armchair, turned down his own television and slid open his little window. He was chubby, rosy red cheeks, half bald (hair on the sides and a few strands on top) and for some reason had a VERY long finger nail on one of his little fingers.

I immediately spurted out my three new words in no particular order 'Televizor kypyvam kade'. If he did know any English he wasn't letting on and ploughed into a load of Bulgarian that I supposed by the hand signals were directions to the television shop. I politely nodded now and again and even said 'da da' intermittently even though I had absolutely no clue what he was talking about. He could have been directing me next door or to Australia, I couldn't make head nor tail of it. After a couple of minutes he gave me a nod, said something else and closed his window.

The television would have to wait so I walked to the bus stop to meet Marta and Sylvia and got on the 280 bus to the city centre. After a few minutes a Bulgarian woman started shouting something really loudly and then the driver started shouting really loudly back. I shot a 'what the hell's going on' look at Marta and Sylvia and they said the woman is angry that the driver didn't stop at her stop and that the driver is angry that she didn't indicate she wanted to get off. The driver sounds really pissed off and continues shouting. I decide there and then I wouldn't be complaining to any Bulgarian bus drivers even if they do miss my stop. My first two journeys on Bulgarian buses have convinced me that British and Spanish buses are really boring.

We went for lunch at a restaurant called 'Happy' where all the waitresses have short red skirts. I ask Marta and Sylvia where I can buy a television and they kindly take me on another couple of buses to a place called 'Technomarket'. I choose a television for 119 leva and then it seems I have to present myself and my television to every member of Technomarket staff before I am allowed to leave the shop. Two guy tells me about the television, they then call another guy over to go and get the television, then a lady gives me some document before I go to the cashier to pay, get a stamp and after that I have to go to a security guy who's blocking the exit. He checks the television, the stamped document, looks me up and down and finally stands aside for me to escape with the television. I feel like I've just crossed an international border.

When I get back to my block the security man sees me clutching my television box and again springs out of his red armchair, slides open his little window and pops his head out. He looks pleased, probably thinking that I'd found his directions really useful. He points at me and says 'football?'. I say 'da' and he reels off a few English teams 'Manchester United, Tottenham, Liverpool..'. I stop him at Liverpool and say 'me Liverpool'. He looks to the heavens, throws his hands up in the air, opens the back door of his office, comes round to where I'm standing, gives me a high five, thumps his heart and says 'Liverpool best'. He then says 'Manchester United' and pretends to spit on the floor, twice. I'm quite impressed he knows about English football and am also counting myself lucky I'm not a Manchester United fan. He holds his hand out to introduce himself and tells me his name: Ivo.

He then asks me something I don't understand so he holds up six fingers and says '6 o'clock' and '5 leva', points at me and points upwards. I look at him confused and he repeats it again but this time he adds slowly '6....1...3' onto the end, which allows me to work out that he must be telling me to be in my room at 6 o'clock with 5 leva. I have no idea why but that's what he seems to be communicating. I nod and say thankyou to whatever it is he has got in store for me and get in the lift with no door and no sides. In fact it has got a door but that stays on the ground floor and now Ivo holds it open for me to get in as if I have just been elevated to king status for saying I like Liverpool. Maybe he thinks I'm actually from there. I sit on my bed trying to think what on earth is going to happen at 6 o'clock. Is that maybe when he finishes work and he will come up to talk about football? But then why do I need 5 leva? He isn't going to send a prostitute is he? For 5 leva? That idea worries me for several different reasons.

6 o'clock comes and passes. I must have misunderstood. I am disappointed and relieved at the same time. Then at 6.15 there is a loud knock on my door. With a gathering sense of trepidation I open the door to find a large, well built boy - about 25ish with blonde hair and black glasses. He doesn't look strange or threatening or anything like that but he is holding a large red drill in his right hand.

He says something to me and walks in, opens my window and half hanging out of it starts looking up towards the top of the 16 storey block as if searching for something. He climbs back in and again says something to me which I don't understand. The next thing I know he plugs in his big drill and starts drilling a hole through my wall to outside. I still have no idea what he's doing but having got his drill all the way through the wall he stands up, says 'Wait here' and disappears out the door.

Nothing happens for about 10 minutes then I notice a cable dangling in front of my window. 5 minutes later the boy comes back, pulls the cable through the wall, unpacks my TV, plugs it in, connects the new cable to the TV and starts inspecting the remote control. He switches the TV on and starts the automatic search process looking for channels. Within a few minutes he is taking me through all of my 210 new channels - movies, porn, sport, all in about 6 different languages. '5 leva' he says. I happily hand it over to him and he leaves after giving me lots of instructions that again I don't understand. I sit on my bed marveling at all the new channels. Brilliant I think, that is brilliant! I'm liking Bulgaria.

More in this category: Day 1 | First sight of Sofia »