Boobs on the bus

On the topic of political correctness and the sometimes amusing lack of it in Bulgaria I was travelling on a public bus yesterday and was sat just behind the driver who was busy, as they often are, drinking coffee, talking on the phone and swearing loudly at any drivers daring to drive slower than he does. Anyway, it was a few minutes before I took a second look at the big poster displayed prominently above the driver's head for all to see. Now in the UK this important, highly visible space might be used to politely remind passengers about certain health and safety regulations or even useful information about the route the bus is taking with the names of the different stops. What was this space being used for in this bus? Yep, you guessed it, a huge A3 calendar poster with lots of naked women flashing their boobs in leather pants and erotic poses. (Click on the photo if you need a close up:)

Actually I tell a lie, now that I have looked again at the photo I notice they are 2 huge calendars, not one. Just in case you were sitting on the other side of the bus and couldn't crane your head enough to clearly see the first calendar poster. No one else on the bus seemed to notice or pay the posters any attention. The calendar posters were dated 2008 and looked pretty worn so they have probably been on proud display above the driver's head for the last ten years. I also very much doubt whether anyone has ever complained about them or whether it has even entered the the bus company's head to take them down. In the UK, and probably in a lot of other countries too, on the first day of putting those calendar posters up with naked women and boobs and all you would get a whole line of petty people demanding they get taken down. Why do people get offended so easily? No one seems offended by it in Bulgaria. What's wrong with a poster like that? If it was a woman driver and she wanted to put up a poster of naked men I wouldn't mind that in the slightest either. I think it makes everything a bit more interesting.

I do apologise for this sub-title but this is a literal translation (according to Google translate and various other Bulgarian-English dictionaries) of the name of a cake (Негърче с мармалад) I saw this morning in a bakery in Veliko Tarnovo. I don't think Bulgarians use the word 'негър' in any offensive way or use it as an insult but surely calling dark chocolate cakes 'little niggers' or 'little negros' is erring on the side of political incorectness? Imagine the outroar if they started selling these cakes in the UK, USA and Sweden but Bulgarians don't seem to bat an eyelid at the name of these cakes. They sell these cakes all over Bulgaria and there are a huge variety of recipes online for making them yourselves at home.

Signs in Bulgaria are mostly written in big, 'screaming at you' capital letters. I suppose this is to ram home the importance of the sign and the included message or instruction. There is no 'Please refrain from weeing in the swimming pool' or 'Polite notice, please do not scare the ducks'. I saw a sign at the swimming pool the other day that translates as 'IF YOU HAVE BEEN BROUGHT-UP SUFFICIENTLY WELL YOU WILL PUT YOUR FLIP-FLOPS ON BEFORE ENTERING THE CHANGING ROOM!!'. That was a hand-written sign on the changing room door, and was the final warning about the importance of wearing flips flops. The first warning came on entering the swimming pool building and translates as 'SHOWERING BEFORE GETTING IN THE SWIMMING POOL AND USING FLIP-FLOPS AND SWIM HAT IS OBLIGATORY!'. This was not only in capital letters, but big red capital letters with a big red line underneath to underscore the importance. This will no doubt be the subject of a future post but it strikes me that in Bulgaria it is considered more important to wear flip-flops in swimming pools and slippers in the house than to put a seat-belt on your child in the car.

Another sign that I was a bit flummoxed at was this sign I saw on a newly opened shop on the main tourist street.. Whoever opened the shop, I suppose after much customary name-choosing deliberation, decided on calling it 'Комфорт шуус'. Now this name immediately excludes anyone from knowing the name of the shop if they don't read cyrillic. And I presume that on a busy tourist street the shop owner is hoping to catch the eye of a lot of foreign and non-cyrillic reading tourists. So this slightly baffles me. But there is nothing wrong with this, we are in Bulgaria after all and it is good to see a shop with a name written in the cyrillic alphabet. But the problem with this is that the name reads 'Comfort shooos' - no Bulgarian words to be seen. So now any Bulgarians who don't know English can not understand the name of the shop either. So to understand the name of the shop you have to be able to read cyrillic and to know English. From a marketing perspective I can not explain why someone would think this would be a good name for a shop? Any ideas?

Finally, if any of you were thinking of going to the petrol station to do some shooting there is already a sign stating that 'shooting on the territory of the gas station is forbidden'. So don't even think about it. 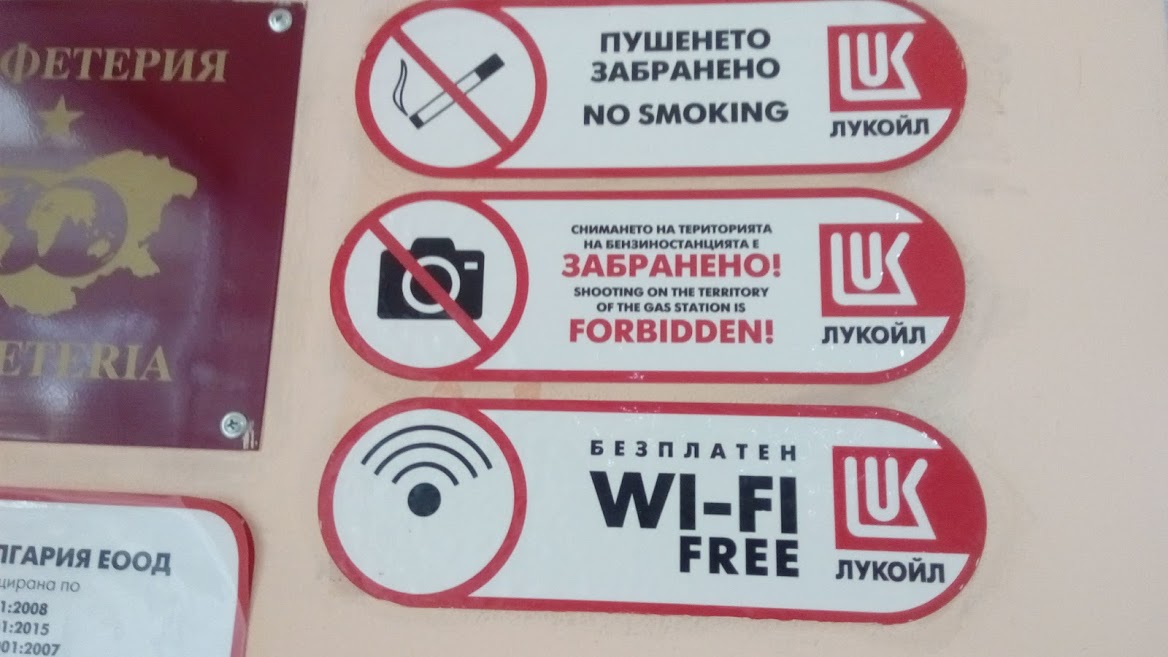